What Happened to Even Elroy?

What Happened to Even Elroy?

It’s a fair question. Sorry this took so long to write (ahem, about 12 years), but here’s the story...

Once upon a time, in a beautiful city by the Bay (that would be San Francisco) a group of guys played some fabulous music in the beer-filled halls and dark stages of pretty much every local club they could find. They were good. Damn good, actually. Never polished—that wasn’t their thing--but as one critic once put, Even Elroy was “…a blend of fascinating energy and melodic piano pop-rock," and a band you just liked to listen to, regardless of your background.

That was really what you were getting when you came to an Even Elroy show.

The band name was never one I was comfortable with. My name is not Elroy, and I don’t know why Elroy would be "even", if it were. The name came from our first bass player's girlfriend, who simply thought the two words sounded good together. She was correct, they did. And they sounded a heck of a lot better than our name the group had previously voted on: Robots! (Complete with the exclamation mark, for more robots!, I presumed, although I was never certain--I just knew it had to go.)

Even Elroy, in its many formations, rocked the San Francisco college and club scene for years, culminating with a successful album release show for our record, No More Rainbows, at the famed Café Dunord in 2008 (yikes!)... after which things pretty much hit the proverbial fan.

At the time, our group was comprised of Scott Barkan on guitar, Adam Thorsness on bass, Ryan Machamer on drums, and myself (not Elroy), on piano and vocals. (In years past, the band members you were likely to see were Matt Ward on drums, Alan Amerault on guitar, and Gautam Baksi on bass, followed by a seemingly never-ending roster of drummers after our founding member Matt Ward left the band.)

Nevertheless, after the release of No More Rainbows, it seemed our album cover of a rainbow going down the drain was a bit too close to real life. In the span of a few months all of our band members lost our jobs, moved away, and we even suffered a catastrophic loss as Adam's girlfriend and a dear friend of the band, Holly, discovered her cancer had returned. Holly passed away a few years later, and it was through her passing that I began to discover a new means of using music as a healing entity, something which has made my way into much of my writing as I’ve moved to a solo recording artist, and began working on writing in other genres.

But back to our question: What happened to Even Elroy?

I believe music has a way of finding its own way in the world, especially music that serves a purpose. Several years ago I was pleasantly surprised to find one of Even Elroy classic, Another Song About Life, had founds its way to a Rod Stewart (of all people) Pandora station, which helped Even Elroy hit a staggering 3.7 million all-time streams... not bad! (Give a listen to Even Elroy on Pandora if you like!)

Other songs like Closet and No More Rainbows found their way onto episodes of the Terrell Owens show on VH1, while the uber-catchy Maybe Someday Soon was used as a theme song for a Boston TV-pilot called The Restaurant, which debuted in the Somerville Theater. And of course, who can forget our Girls Kissing Girls video, complete with a marching band and a green canoe we carried through the streets of Boston, made infinitely more popular with its heavily searched title.

Mostly, though, these songs and other unfinished ditties remained in my head for the better part of a decade, until a few years ago when I started working on a new album with my good buddy and Even Elroy guitarist extraordinaire, Scott Barkan. Through my trips back and forth to Scott's home recording studio in Philadelphia, we discovered we still had a lot of music in our brains that we needed to record. The result of this collaboration is my new record, Better When I'm Older, on which Scott played everything except for my piano and vocals. The songs are a bit different than the old Even Elroy sound, but we managed to give a good nod to the previous work, with the track Another Rainbow.

It was a great experience working with Scott again, and through this time I also reconnected with pretty much all my previous band mates, from playing back at Hotel Utah with my long-time bass player Ben and drummer Ryan, to catching up with my buddy Matt Ward in Seattle, to an ongoing and never-ending Instagram chat with Alan Amerault... the guys who once all shared my story and stage are still part of the reason I play music to this day.

In this lead singer's humble opinion, Even Elroy was probably the best band you could’ve been lucky enough to stumble upon if you were drunk on a Friday night, wandering the streets of San Francisco. We were friendly, eager, and always offered a money-back guarantee on every show we played. (To date, not one person ever asked for their price of admission refunded.)

Even Elroy was quirky, and kitsch, if that word still applies to music these days. Even Elroy was the band that just made you want to nod your head with a beer in your hand. Even Elroy was a group of guys who loved music, loved playing music in a tiny rehearsal studio, and loved performing. For me, Even Elroy was a chance to hang out on a Friday night with all my friends, play songs I wrote in my apartment, and get paid in free beer (or the occasional few hundred bucks split four ways) for doing so.

Even Elroy was, and still is, a huge part of why I became a musician… but it’s not the only part. I’d had to tuck that rock band that loved to perform on college quads and dingy clubs and living room parties overlooking the Bay into the corner of a bigger picture, one that has grown larger in recent years. My writing has expanded, and so has my desire to connect with the world. But on any given Friday night, if I had the chance to gather with all my friends and play some music, you know exactly where I'd choose to be, and what music I'd choose to play.

If you have never heard of Even Elroy, and want to check out some pretty enthusiastic while-some-say-unpolished piano rock, you can find our records streaming below. Just like every show we ever played, all music comes with a money-back guarantee.

Stream Even Elroy on Spotify 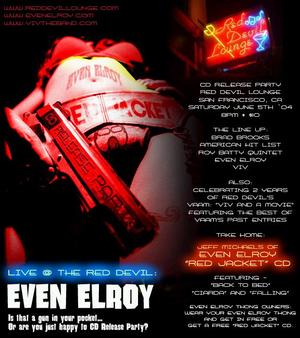 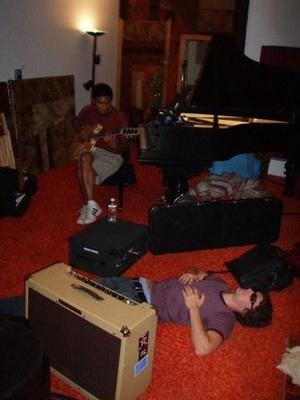 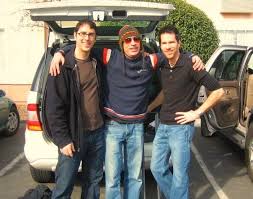